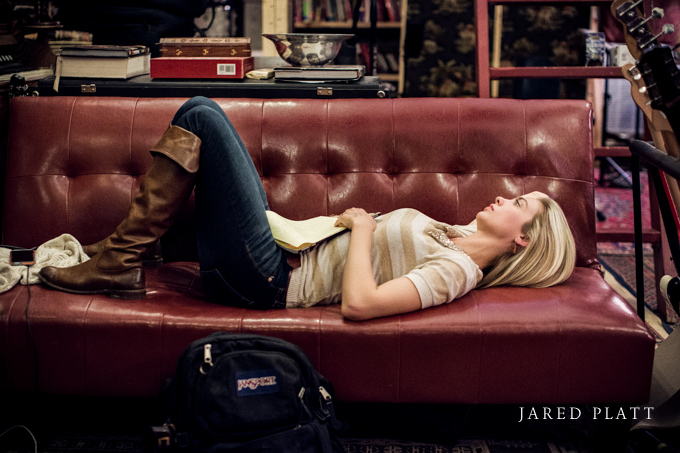 Creativity in Action: The Business of Creativity When the man or woman on the street thinks about the process of making music, they think about a musician and a piano, or a guitar.  Sitting down and playing for hours, perhaps making notes on some blank sheet music, writing some lyrics under a sycamore tree on a funky hand made notebook, and maybe the younger among us add in a snapshot of the musician playing music on their iPad into Garage Band.

But the creative process is goes beyond the romantic and requires organizational skills and business acumen. When I walked into Cason Cooley’s recording studio in Nashville, TN, to photograph Mindy Gledhill, the first thing I noticed was the wall sized blackboard with a production grid on it.  You can see the songs that are being recorded and the series of steps that each song must go through during the production of Mindy’s new album.  There are a lot of boxes to check.  During short recording breaks, Mindy wasn’t relaxing in a chair, shooting the breeze with the studio musicians, she was fielding calls that were clearly about business. So, while it is true, that musicians and artists spend a lot of focused time writing lyrics in notebooks and making sketches on napkins, the majority of any successful artist’s time is spent in managing production and business and checking off boxes on an excel spreadsheet or its funky blackboard equivalent. Thanks to Mindy Gledhill for allowing me to invade her creative space as she worked.  You can be a part of her creative venture as well by pledging to her album production at Pledge Music.  The beauty of it is that you will also get some very cool things in return.  One of my favorites is a signed lyric sheet.  I think that’s about as cool a memento as you can get.  Of course, I am biased, I was always the lyricist in the band.

If you haven’t heard Mindy’s music, here is a taste of it.  You can get more at MindyGledhill.com.